It’s been a great year of diverse theatre! Here’s a roundup of this season’s best numbers:

On Wednesday, Broadway fans and performers gave Snapchat a little razzle dazzle! Snapchat featured an “On Broadway” live story which showcased shows including Hamilton, The Phantom of The Opera, The Lion King, Aladdin, An American in Paris, Jersey Boys and Wicked. Check out some of the great Snapchats from the night. 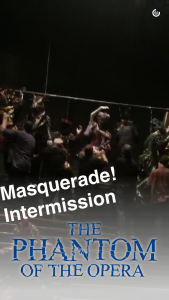 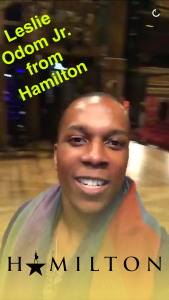 This week marked the beginning of previews for Misery starring Bruce Willis and China Doll starring Al Pacino. Both productions are scheduled as limited engagements. Misery is set to close on Feb. 14, 2016, and China Doll on Jan. 21, 2016. You will not want to miss these performances.

NeNe Leakes is joining the cast of the hit musical Chicago for 4 weeks only! She will be stepping in as Matron “Mama” Morton from Nov. 23-Dec. 20, 2015.

Dames at Sea Opens on Broadway

The production docked at the Helen Hayes Theatre last night to mixed reviews. David Rooney of The Hollywood Reporter said, “…with an appealing cast of six that makes its featherweight pleasures infectious.” Read all of the reviews here.

The League names Tony Award winner Kelli O’Hara (The King and I) and Academy and Golden Globe winner Marlee Matlin (Spring Awakening) as the 2016 Kids’ Night On Broadway National Ambassadors. Kids’ Night On Broadway allows for kids ages 18 years or younger to see a show for free with the purchase of a full-priced ticket. This event takes place in many cities across the country and throughout the year. Check kidsnightonbroadway.com for dates and locations.

And the music kept rolling out in all of New York City. The award-winning musical theatre writer donated $150,000 towards new musical instruments to the City Of New York’s Fund for Public Schools. This is a part of a new initiative called “Rock the Schools”. Webber’s donation will help twenty public middle schools across the city.