The Lion King Reigns On Broadway

The Lion King became the third-longest running Broadway show in history earlier this week. This production has run for 18 years and has played over 7,486 performances. 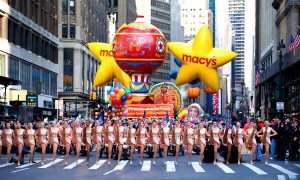 Cast members of The Fiddler on the Roof, Finding Neverland, The King and I, On Your Feet! and Something Rotten! will perform during the first hour of NBC’s broadcast of the 98th Annual Macy’s Thanksgiving Day Parade. School of Rock will be jamming out later on in the broadcast. Make sure to tune in at 9 a.m on Nov. 26.

On Your Feet! opens on Broadway

The musical based on the story of Grammy Award winners Emilio and Gloria Estefan opens tonight at the Marquis Theatre. Check back here for review updates!

You’re Just Too Good To Be True, Jersey Boys

Jersey Boys celebrates 10 years on Broadway, tomorrow! This production has played over 4,140 performances and is the 12th longest-running Broadway show in history. Check out an interview on TODAY with Frankie Valli and Bob Gaudio!