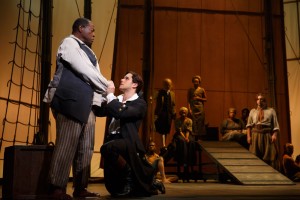 The musical based on the story behind the iconic song will play its final performance on October 25. By the time of closing, Amazing Grace will have played a total of 24 previews and 114 regular performances. Don’t lose faith folks, a national tour is in the works! Stay tuned…

AT&T, You Just Got Patti LuPwned

THE QUEEN HAS SPOKEN and she urges you to drop AT&T! “I dropped them years ago, not because of an arrogant and ignorant spokesperson, but because their service stunk,” LuPone told Playbill.com. “I made the right decision to go with Verizon.” Read the rest of her statement here. Come on AT&T, who do you think you are?!

Mann Steps In To Finding Neverland

Tony nominee Terrence Mann is returning to Broadway as Charles Frohman and Captain Hook in Finding Neverland. Mann will be replacing Anthony Warlow who replaced Emmy winner Kelsey Grammer during his summer hiatus. There is no news if Grammar will be returning to the production.  Mann will begin performances on September 29.

Lucas will play her final performance on October 4. Not to worry Fun Homies, Gabriella Pizzolo will take over the role of Small Alison beginning October 6.